Posted on October 29, 2012 by destructivetesting

Upcyclers give new life to items that might otherwise be tossed.

Michael Smith is an artist who uses re-purposed materials to make pieces of art, such as this little free library at his Shorewood home, which is made from a kitchen cabinet. It holds 100 books.

Unlike recycling, which breaks down material to create something new, upcycling gives new life to materials or items that might have otherwise been tossed in a landfill.

The little free library in front of his house was fashioned using an old kitchen cabinet from Habitat for Humanity’s ReStore in Wauwatosa. Smith put a back on the cabinet and topped it with old tin ceiling tiles to protect the interior from rain. It holds 100 books. 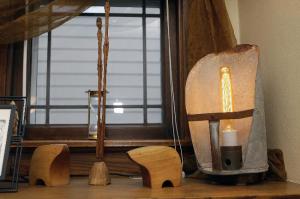 “I’m not really interested in making pretty things,” said Smith, who uses scrap metal in many of his works. Smith retired after 35 years in the landscape business and, he said, “I wanted to make what I wanted to make.”

That included a light that uses part of a bumper from a Karmann Ghia automobile.

Smith, the Shorewood resident who has an Etsy.com  shop called DestructiveTesting, used an old flour scoop for a lamp and barn wood to frame mirrors.

“I can make a lamp out of just about anything,” said Smith, who fashioned his first lamp by cutting down a cutting board. Some of his inventory is on display at Gallery 218, 207 E. Buffalo St. Other pieces are sold throughout town and on Etsy.

To design the interior of the Walkers Point restaurant Braise, Paul Sherer found inspiration – and utility – in the building’s former life.  Sherer, who owns interior design firm Think Drawer, re-purposed wood from the bar’s two bowling lanes to craft the family-style tables in the restaurant, 1101 S. 2nd St. The bowling lane guide arrows are still visible under the finish, and industrial steel pipes serve as the table legs. The walls were finished and given texture with scrap wood and old barn board.

He has learned where to get the scrap material; how to get material remnants at a discount and other ways to salvage goods that might have otherwise gone to waste.

“It’s the most fun part of my job,” Sherer says about using old materials in new ways.

The idea of turning something that might have been considered junk into a thing of beauty is called upcycling. To Sherer, upcycling is as simple as “trying to use common materials or material already on site in a creative way.”

Bonnie Lynn Loduha, who has homes in Wauwatosa and Little Lake Muskego, on an even bigger project. She upcycled an abandoned farmhouse in New Berlin into a shopping space.

Several times a year, Loduha hosts like-minded artisans for shopping weekends at the farm she callsHawthorne Hill Farm. They set up booths in the barn to sell everything from mittens stitched from old sweaters to holiday crafts such as Santas made from wooden spindles.

Susan Scherr, who shows her work at Hawthorne Hill, makes decorative pieces out of found objects. The Boo Tray, for example, is an old serving tray that gets new purpose as a Halloween decoration. Scherr collected silver trays, then added a vintage fork and knife on each before fastening skeleton hands on top. She put a ribbon at the top so the trays can rest on a doorknob or hang on a wall.

Downstairs in the Hawthorne Hill barn, Loduha’s son Joe has a workshop and business where he makes what his mom calls “mantiques.” She explains that the coffee table in front of her was once an industrial furniture mover used in warehouses. Her son took it apart, added pieces, stained it and turned it into a piece of furniture. Loduha said she has seen a similar piece at Restoration Hardware for $1,200.

Even commercial businesses have gotten into the practice of using something old for a new purpose. At Duluth Trading Company in Port Washington, merchandise is displayed on old workbenches. A fishing dinghy hangs from the ceiling, and a vintage diving suit stands sentry to the menswear.

The work table is purposeful, designed to make customers think about craftsmanship as they flip through flannel shirts or blue jeans, said company president Stephanie Pugliese.

The idea of upcycling, but not the name, dates to the Great Depression, when items were re-purposed out of necessity. Modern upcycling is a way to stay green. Danny Seo, who has written books on upcycling and decorating, expects it’s here to stay.

“I think we get confused by the words trend and cultural shift,” said Seo, a “Today Show” contributor. “A trend is Ugg boots. A cultural shift is a way that we as a society change our habits slowly and over time.”

Seo, whose new book “Upcycling Celebrations: A Use-What-You-Have Guide to Decorating, Gift-Giving & Entertainment” (Running Press, $18) offers examples of how to upcycle. Turn to page 158 to see how he turned a stack of old warehouse shipping pallets into a dramatic bar (the wine bottles tuck nicely into the pallets). On page 179, he explains how to turn glass bottles into spooky ghost candleholders.

I'm a self-taught artist who prefers to use found objects in ways that were never intended. I'm not interested in making 10 or 100 of the same object. This, of course, takes more time to make each piece. I also prefer a more minimalist look, where each part of a piece can be appreciated. I consider my clocks to be small sculptures with moving parts. And, my lamps to be small sculptures with light. My mirrors are reflective sculptures. DESTRUCTIVE TESTING means to push something to it's limits to understand it's structural performance or material behavior under different stresses. I interpret this in my artwork as using materials in different ways or combinations than they were designed to be used. I also just like the slightly ominous sound of the term...
View all posts by destructivetesting →
This entry was posted in recycled, sculpture, upcycled and tagged abstract, art, black and white, destructivetesting, home decor, industrial, interior decorating, lamp, light, metal, mike smith, Milwaukee Journal, mixed media, modern, ooak, recycle, recycled, upcycle, upcycled. Bookmark the permalink.